At the time of the Spanish Conquest, Tohil was the patron god of the Kʼicheʼ. Tohil’s principal function was that of a fire deity and he was also both a sun god and the god of rain. Tohil was also associated with mountains and he was a god of war, sacrifice and sustenance.

THIS DEFINITION WAS FOUND ON WIKIPEDIA AND IS NOT MY WORK

Emily sees the news story about Marlin’s suicide and desperately tries to contact EZ.  Miguel watches from inside the house.

EZ (JD Pardo) awakens and is clearly extremely bothered by the events of the night before.  Trying to shake Marlin’s image from his head, he is seen rinsing out  the bloody T-shirt he was wearing the night before and ignores a call from Emily.

In the next secen, we see that Marlin’s body has been discovered and the Santo Padre Police, including officer Frankie is there. The cops are taking photos of the scene and investigating the clerk’s death. Mayor Pena arrives and she is informed that it appears that Marlin was deeply in debt, both credit card and bookies and was being hounded by collectors.  All evidence points to Suicide.

Angel (Clayton Cardenas) arrives for a discussion with his father, Felipe (Edward James Olmos). He admits to Felipe that he knows his real name is Ignasio Cortina, EZ finally told him. Felipe gives him the short version of his his life as a Federale and his time with the Galindo cartel. Angel admits to Felipe that Adelita is pregnant with his child.

Angel’s worries that he will not be able to be a part of his child’s life, since Adelita’s currently in Potter’s hands. Felipe drops some (cryptic) pearls of wisdom. “Potter, he’s a slippery, arrogant f**k. But he’s got weaknesses. He makes mistakes, like we all do,” says Felipe.

Leti, Coco’s daughter, returns to the show this week.  We see that she has been living with him and that they have had all of the normal Father/Daughter struggles (dirty dishes in the sink, empty cereal box not throw out, basic household chores not being completed).  Leti surprises Coco with breakfast she picked up from his favorite resturant. 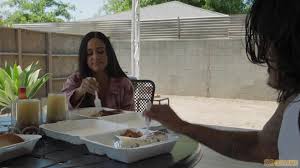 As they eat, Leti’s friend, Gabriela, appears in his kitchen.  Leti explains that she has been helping Gabriela get her family to America, but that the coyotes lied to them, demanded more money and got physical with them. They were especially physical with Leti when she told them that her father was a Mayan! Leti (Emily Tosta) shows Coco bruises she received from the coyotes manhanding her.

The MC Gets Involved in the Coyote Situation

In Tohil, Coco goes to Bishop (Michael Irby) and the club, asking for assistance in helping Gabriela’s family. Bishop asks Coco why he thinks the club should get involved and Coco explains that the coyotes are a Mexican M.C. called Vatos Malditos. He adds that the club normally runs their operations out of Tijuana and shouldn’t be operating on this side of the border in Mayans territory.

Bishop tells Coco that he didn’t know that they were working “right in our backyard” doing their coyote work. Coco confirms that Leti saw them at the place where the exchange was supposed to happen. The table get upset when Coco tells them that Leti said that the Vatos Malditos laughed when she told them that her father was a Mayan.

EZ chats with Gabriela while Coco is meeting with the Mayans to talk them into helping her out. 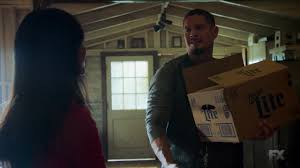 They connect over their love of poetry, with EZ able to complete a poem Gabriela has a line from tattooed on her forearm.  Leti notices some flirtations and is clearly displeased with them.

The Club Takes a Role in Rescuing Gabriela’s Family

Bishop tells the other that the club has been distracted by the Galindo deal and  has forgotten to take care of business in their own backyard. Taza (Raoul Max Trujillo) tells the Mayans that Vatos Malditos was formed in Mexico. Taza tells them that he patched into the club when he was “young and dumb.”

When he joined them, he says the club did petty crimes such as chopping cars and small-time drug dealing. However, he tells them that all changed when El Palo became President. El Palo got the club involved in human trafficiking. Taza could not be a part of that and decided to leave the club. That’s when he headed to the U.S. and joined the Mayans M.C.

In Tohil, Taza explaied that the club, hungry for money, recruited as many members as they could. He said they barely prospected. Taza explained that the Vatos Malditos have no sense of pride or honor.  Further he tells the group that the club is extremely inhumane, separating families who can not pay their fees, putting them in cells and barely giving them food or water. They collect from those whose families can pay and dispose of those whose families can not.

Bishop and the club decide something must be done and they set out to hunt down the Vatos and free their prisoners, including Gabriela’s family.

Coco, EZ, and Angel head out looking for information on any unusual Vatos activity. Their contact takes them to a house where a scooter club, that have nothing to do with Vatos are hanging out. It is then that EZ sees a pizza delivery driver and tells the other that if a club had people holed up in a safehouse, they’d need to feed them something. The guys split up and check out the all of the restaurants that make deliveries in the area. Coco and Angel come up empty, but EZ hits the jackpot when he gets the address of a place that’s had five big deliveries within the last week.

When they get to the house, it’s windows are covered by wood. They guys notice that there are no guards on duty.  EZ knocks on the front door, announcing another food delivery. although they cannot determine who ordered the food they crack the door to check things out and EZ and the Mayans bust through, taking the Vatos by surprise.

The Mayans enter shooting everyone who moves, and the Vatos return fire. They easily overpower the Vatos. The Mayans search for Gabriela’s family, breaking down the locked doors where the Vatos are holding people.  They are mostly men and a few women, all huddled together and terrified, but there is no sign of Gabriela’s mother or little brother.

Only one of the Vatos remains. When the prisoners still won’t talk, for fear of retribution, Coco puts a bullet in this head.

Bishop learns some of the prisoners were taken away closer to the border and put into cages. A woman explains the coyotes traffic the young girls and kill the others, if they don’t pay. One of the men knows the location of the cages and offers to lead the Mayans to them.

When the Mayans arrive at the cages, Bishop sends a message to other club presidents letting them know what is about to happen.  He lets them to know that he is taking care of a problem that never should have been allowed to happen in his territory.

Bishop put the blame on himself while talking to EZ, but EZ’s won’t hear of it. He  relates to Bishop everything that he has done for the M.C. in the last year, telling him it was epic.

Bishop says that he is happy to have Angel & EZ in the club. He says it is important to have family close in the club. “Do you know what separates us from all the other scumbags, gives us the courage to look into the mirror? (Pointing to his patch) This fucking piece of leather, the history that hangs on it. Means I’ve earned the respect of men, men I love, men I’d die for. Men who’d die for me. The money, the weight, it can’t lead. We have to serve something greater.”

In Tohil, the Mayans develop a plan. Coco says that the Vatos will be on “high alert” after the Mayans “clean up” at the safehouse. The club members think they have moved on the Cages so quickly that they have most likely beaten the Vatos backup to the cages. Bishop tells them to prep for an army and pray for a squad.

The Mayans breach the building and come under fire. The Vatos group has more fire power than those at the safehouse, but the Mayans have Marine sharpshooter Coco on their side.  Before disposing of all of the Vatos, one is able to light a fire in front of the cages. EZ shoots the lock off the cages and the Mayans hurry to free the prisoners and get them out of the building just in time.

Gabriela’s mom and brother are rescued. Everyone has inhaled a lot of smoke but otherwise are fine.  Coco tells EZ that they are the hero’s in this.

Gabriela’s mom and brother are brought back to the clubhouse in the back of a pick up to be reunited with Gabriela.

Leti watches the reunion. She comments to Coco that they will never have that with their “Mom.” and Coco responds “That’s because I killed her.” He tells Leti that he is proud of her for trying to help her friend, despite the fact that she almost got them all killed. He kisses her on top of the head and tells her that he loves her.

Leti says “I love you too, Dad.”  But that feels awkward and the two decide she will continue calling him Coco.

As EZ walks away, Gabriela looks after him, as if she has something to say, but she remains quiet and goes back to hugging her mother and brother, Leo.

The reunion causes EZ to think about his mom. He goes back to his trailer and begins looking through the paperwork he has collected.

The Galindo’s Are Summoned

Mayor Pena (Alexandra Barreto) calls Emily (Sarah Bolger) and Miguel (Danny Pino) in for a meeting. She tells them Marlin is dead.

She tells them that prior to his death, Marlin sent an email to the Mayor and other council members telling them that he accepted bribes from China regarding the Agri-Park project. With  the Chinese now out of the bid, the Galindo Enterprises will win the contract.

Miguel is Suspicious in Tohil

Once they leave the Mayor’s office, he asks Emily what is going on. He asks her if there is anything he needs to know.  Emily denies knowing anything about what happened to Marlin. Miguel is not convinced by her denials and instructs Nestor to watch her 24/7 and report back to him.

Emily calls Miguel to tell him that she will be home soon, but first she needs to stop by the clerk’s office to see Ileana. She tells Miguel that Ileana is taking Marlin’s death hard and she wants to see her.  Next, Emily enters the City Hall and heads down a hallway where she lets EZ in through a sliding door. EZ tells her what happened at Marlin’s house. He tells her that after Marlin died, he looked around and decided that  Marlin’s past-due bills would make it look like he was depressed and with the added guilt of selling the bid to China, he killed himself. He tells her he sent the emails to take care of the bid issue for Emily.

Emily realizes that Marlin’s blood is on her hands. EZ corrects her and says“Marlon’s dead because he pulled a gun on me while I was doing a favor for someone I care about.”Emily hugs him and thanks him. She promises to anything she can to help if he and his family ever need anything. EZ immediately takes her up on her offer. He pulls out some papers and says, “It’s a family thing.”

No Halo where you can get the latest on MAYANS mc
Contact us: info@ice.today